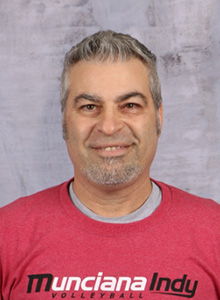 Dominic is a transplant from Illinois and brings a rich mix of coaching and playing experiences to the Munciana Boy's Program. He played on the United States Air Force Club Team in Turkey while serving overseas.

After the USAF, he played indoor and beach volleyball at various competitive levels before turning his focus to coaching. In his 15th year of coaching, he lead the Brownsburg High School Men's Volleyball Club as varsity head coach in the 2019 season.

Prior to Brownsburg MVBC, he was Varsity Coach of Bishop Chatard High School Men's Volleyball Club and was recognized by the IHSVCA for coaching honors and outstanding team academic performance during the 2017/18 seasons. He is heading into his 5th year as a boys club coach (12U-18U).