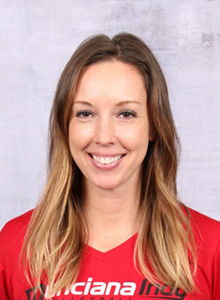 Heather has been in the gym as long as she can remember. She grew up playing for Munciana and won National Championships in 2000 and 2002, with the 15 Open Slug Bugs and the 17 Open Hokies respectively. Heather continued to play in college on the club team at Ball State University. This is also where she started transitioning into coaching. She coached the Northside Middle School Titans and several Munciana teams. After graduation Heather's coaching career continued with the Edge Volleyball Club in Chicago. After moving back to Indianapolis she has coached with Bishop Chatard High School since 2013 as the JV Coach, Varsity Assistant, and is now Head Varsity Coach as of 2019. During her time with Bishop Chatard, Heather has also worked with the Junior Trojans Volleyball Club as a coach and an administrator. When she isn't on the court Heather enjoys adventures with her husband, Noah, and their Golden Retrievers, Hazy and JoJo. Those adventures usually involve a stop at Starbucks, and a quest to find the best cake in town.